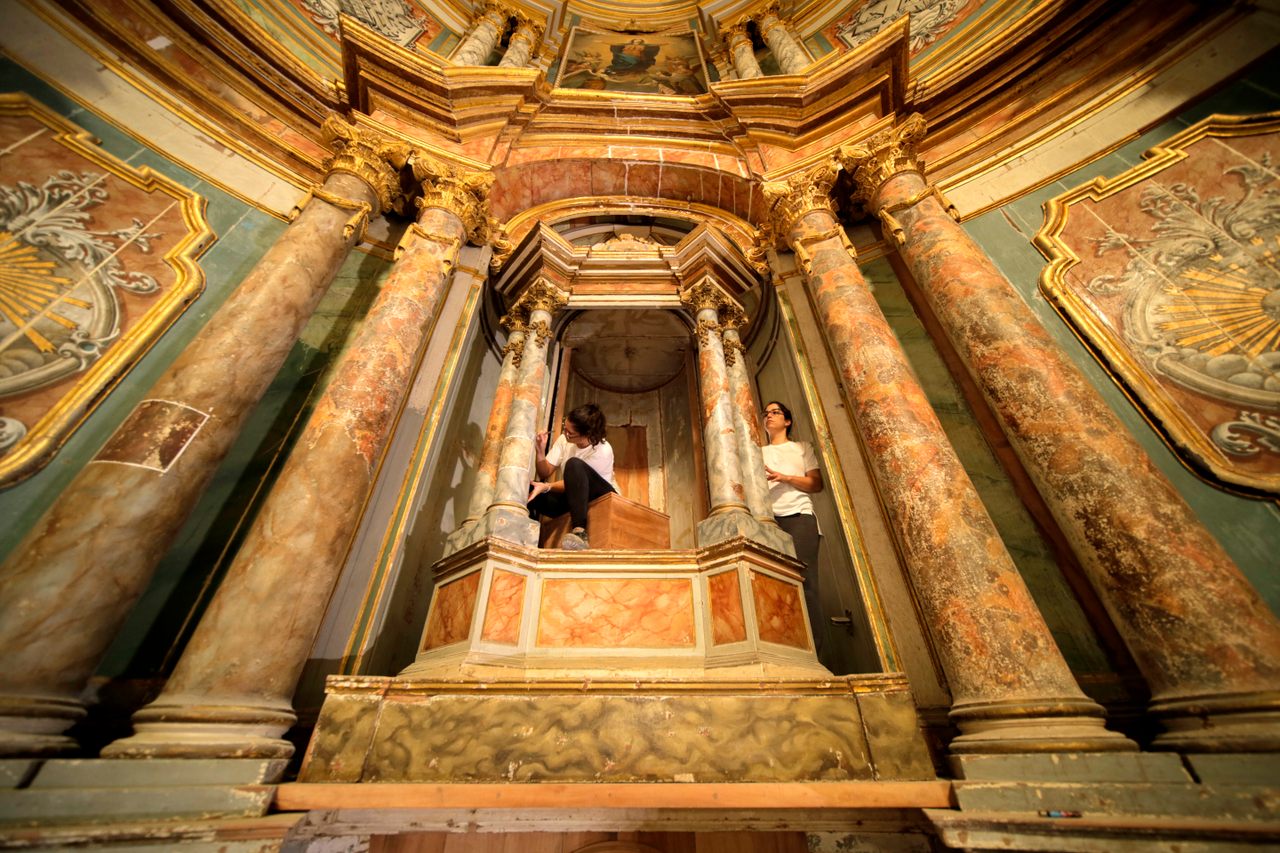 More than a century ago, when Panama was still a part of Colombia and surrounded by a mosaic of tropical forest, Panama City had just one cathedral. The Catedral Basílica Santa María la Antigua, built in just 108 years—a blink of an eye, parochially speaking—isn’t baroque, but the altar is beautiful and ornate. In addition to the people assembled in the pews, the priests there had another, hidden audience: clusters of orchid bees with electric green faces that had made their cellular homes in the crevices of the altarpiece, buzzing softly and, one might assume, soaking in the word of God.

Whether the priests thought anything of them is something we’ll never know, but the bees vanished in 1875, when restoration workers, repairing damage from an 1870 fire, covered their cells in gold leaf. The bees, entombed in gold and later mummified, stayed hidden in the cathedral until 2018, when a new set of restoration workers unearthed their cells while cleaning the columns of the altarpiece, also known as the reredos. “I’ve been working on restoration for 20 years, and many, many things have passed me by,” says restorer Sofia Lobo, who was the first to discover the bee cells. “Never in my life have I seen anything like this.” Lobo, who works for Dalmática Conservação e Restauro, an art restoration service in Portugal, is coauthor on a paper on the bees published in the Journal of Hymenoptera Research.

“Our cathedral is quite poor, by cathedral standards,” says Wendy Tribaldos, a museologist and journalist who worked as a chronicler for the cathedral’s restoration. “But it was originally a hut.” In 1510, the Spanish colonists, in their hot, cruel pursuit of gold, defeated the indigenous leader Cémaco and conquered his town, according to an entry by Inga Töller in The International Encyclopedia of Revolution and Protest. They renamed it Santa María La Antigua, and two years later Pope Adrian VI authorized its first cathedral in a mud hut with a thatched roof that had belonged to Cémaco himself. In 1524, the cathedral moved to Panama City, where it stayed until Welsh privateer Henry Morgan razed the city. Panamanians rebuilt their capital nearby, and in 1688 construction began on the Catedral Basílica Santa María la Antigua as we know it today.

Since its consecration in 1796, the cathedral has undergone a number of renovations, some for the better and some decidedly for the worse. Part of the cathedral’s facade fell in a 19th-century earthquake and wasn’t repaired until 2004, using four different types of stones in different colors. “Too many for my taste,” restorer Antonio Sanchez Barriga Fernandez says in a documentary Tribaldos made about the cathedral. In 1875, five years after the cathedral was damaged in a fire, the church replaced its brick floor for a cheaper option. “The authorities decided to place this concrete floor that I personally call ‘the parking space,’” Ricardo Gago, president of the Comité Amigos Casco Antiguo, which is devoted to restoring old Catholic churches, says in the documentary.

The cathedral languished in relative disrepair until news came of an important visitor—perhaps the most important visitor, short of, God—Pope Francis, who planned a visit to Panama in 2018. “We had to restore the cathedral to restore the pope,” Lobo says. Thus began the years-long cleanup and restoration process of transforming a building in disrepair into something worthy of His Holiness. “Before the restoration started, the church had broken windows, so pigeons made their nests inside the cathedral,” Tribaldos says. “But there was a resident cat, so at least there were no rodents.”

To prepare for Pope Francis, Lobo was tasked with restoring the reredos, an ornamental altar backdrop more than 20 feet tall. She inspected the altarpiece, which had been carved out of slabs of mahogany, on a needle-like ladder. From this uneasy perch she reattached paintings that had fallen to pieces, cleaned with brushes and solvents, and applied gold leaf to areas where it flaked off. The process took four months, during which Lobo realized that some knobs or protuberances in the design weren’t mahogany at all. “We didn’t even see the cells at the first moment, because it was covered in gold,” she says. “But when we saw the nests from behind, we knew it was something natural, something made from some kind of bug.”

The structure resembled bark-like clusters of cells, more like coral than a honeycomb. The shape confounded Lobo. “Mostly you find things made by rats or bugs, or even nests from normal bees that use wax,” she says, “but not like this.” Lobo removed a cell and showed it to a fellow restorer for his input. “He told me he’d seen something like this from butterflies in Jamaica,” she says. “It didn’t sound like it was possible, but he has almost 70 years of experience, so maybe he was right.”

Lobo then showed the cell to Tribaldos, who showed pictures of them to entomologist Annette Aiello at the Smithsonian Tropical Research Institute (STRI) in Panama City. Aiello recognized that the cells came from bees, not butterflies, and gave them to her colleagues Bill Wcislo and David Roubik, the latter of whom happens to specialize in bees. Wcislo and Roubik easily identified the cells as homes built by mysterious, rarely seen female orchid bees of the species Eufriesea surinamensis. “In my house, my grandfather had bees, so I was used to seeing bees doing their thing,” Lobo says. “But I didn’t imagine that this was a thing that a bee could do.”

Historically speaking, honeybees might have made more logical church-goers, as their industrious nature and sweet honey are revered at length in scripture. The orchid bee, on the other hand, looks a little divine itself: an otherworldly metallic, auroral sheen on its face, foil-like tongue nearly as long as their body, and fringed back legs the color of the sun. Male orchid bees are relatively easy to spot around the orchids they frequent, but females are far more reclusive. They build nests out of mud, bark, and resin that are hard to spot in their native forest habitat. “There have been no detailed studies of female nesting biology,” Paola Galgani-Barraza, a researcher at STRI, writes in an email. Female orchid bees collect pollen and nectar from many flowers, making it tough to pick out a specific place to go looking for them. This study represents a “distinct trove of information,” Kate Ihle, a molecular biologist at the USDA honeybee lab who was not involved with the research, writes in an email.

After Lobo collected every inexpertly gilded cell from the reredos—more than 120 clusters in six aggregations—Galgani-Barraza and STRI pollen expert Enrique Moreno analyzed preserved pollen grains inside each cell. The result was a kaleidoscopic survey of the biodiversity of 19th-century Panama City, with pollen from 48 species of plants, more than twice the plant species known to be frequented by a related species of orchid bee in modern Brazil, according to the paper. The bees also visited species that thrive in sunlight, such as spiral gingers, and plants in the genus Costus, as well as canopy trees that are usually only found in mature forests, such as the shaving brush tree, in the genus Pseudobombax, Galgani-Barraza says. The bees even visited a rare species of mangrove, Pelliciera rhizophorate, or the tea mangrove, which is now extremely rare in central Panama. As the researchers write, the bees “were catholic in their flower preferences.”

“It is also interesting in showing that these bees can and did coexist with humans, when the land-use change that humans were causing is not too extreme,” Berry Brosi, a biologist at Emory University who was not involved with the study, writes in an email. Brosi notes that orchid bees are relatively sensitive to changes in land use. According to the USDA’s Ihle, a study comparing a current population of E. surinamensis could offer insight into how human development has influenced the bees’ dietary preferences.

While the century-old pollen fascinated researchers at the lab, Lobo was transfixed by the bees themselves: dessicated in their gilded cells. “Bill [Wcislo] told us that it was possible that some of the cells contained mummified bees,” Lobo says. She cut open the first cell and found two unlucky females, their emerald green faces faded to brown.“We were very, very lucky to find these two.”

Once the bees had been removed, Lobo continued her restoration of the altar, and had a far less intriguing, far more common encounter. “There was a termite infestation in the altar,” Tribaldos says, adding that Lobo had to replace a significant percentage of the work with new wood that had yet to be touched by termites.

The one question remains on every researcher’s mind—why the restorers decided to gild the bee cells—may never be answered. Lobo suspects they might not have seen them, since the cells were tucked away in the crevices and scrolls of the columns. “People can’t see it from the ground,” Lobo says. “I think the restorer’s thought, ‘Oh, this must be a little piece of wood attached to the altar.’” Galgani-Barraza speculates that it might have simply been easier to cover the cells than to remove them. As further illustration of the overall low quality of the 1875 restoration, Tribaldos cites red, green, and gold glitter that had been plastered on the reredos. “How can you put glitter on an altar!’ she says. Today, the mahogany beneath the oxidized glitter has been revealed again.

On January 26, 2018, Pope Francis smeared chrism over the restored altar, officially reconsecrating the cathedral. None of the researchers know if Francis had been informed of the ornate crypts of orchid bees that once adorned the columns behind him. “The Pope came to Panama on a big encounter, and had plenty of things to talk about,” Lobo says. “I don’t think they stopped to talk about the bees.”

In his speech in the basilica, Francis spoke on the weariness of hope, asking those gathered to “not allow ourselves to be robbed of the beauty we have inherited from our ancestors,” according to The Tablet. “It no longer belongs only to the past, but it is a thing of beauty for the present. That is how the Lord works.”

The work is for the 90th anniversary in 2021, but the real party is still a decade away.
festivals

The dessert, which was part of an art exhibit, caused an uproar when a politician had a slice.
Video • AO Docs