For Sale: A 19th-Century Screw-Pile Lighthouse With a View of Key West - Atlas Obscura
Want to see fewer ads? Become a Member. 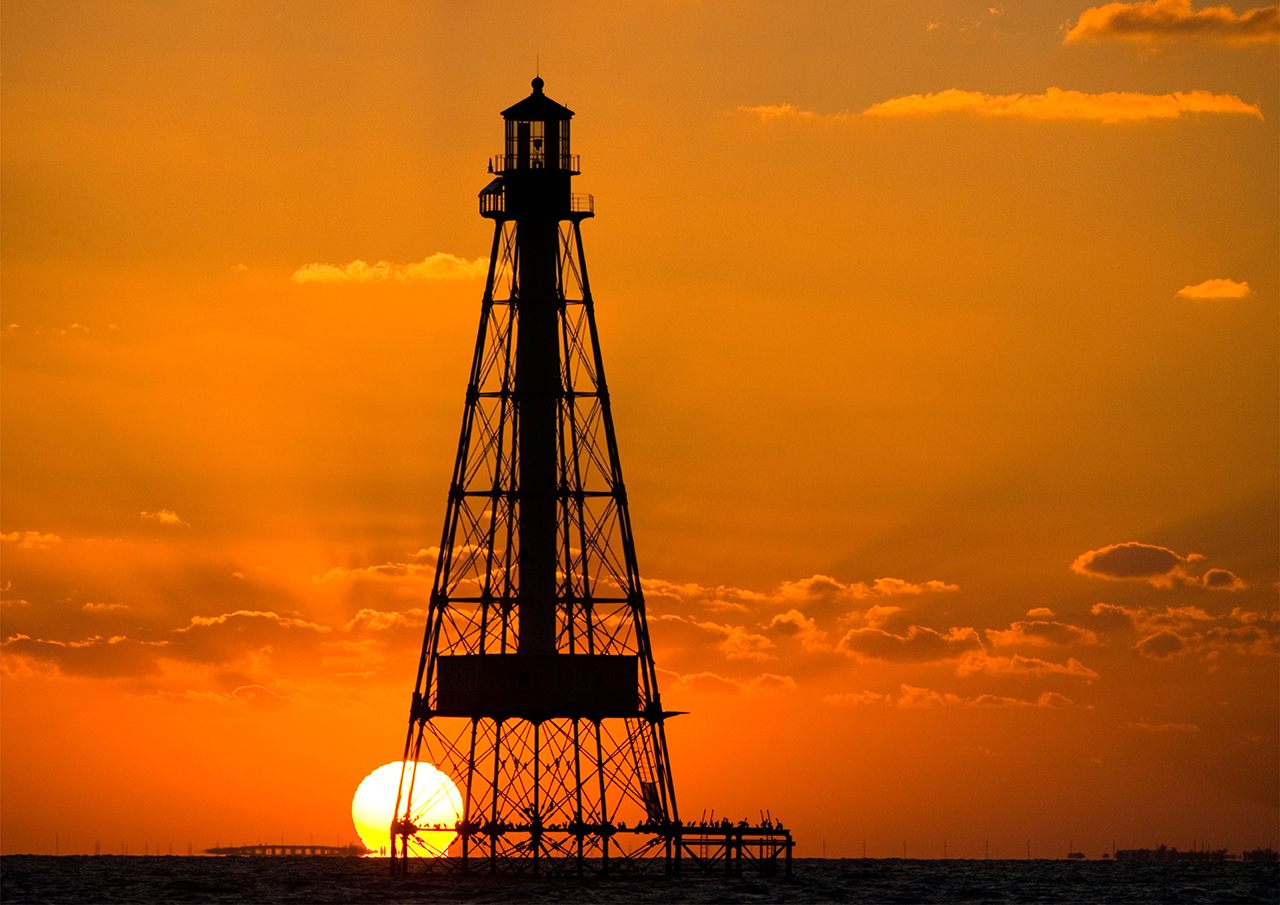 The Alligator Reef lighthouse, off the coast of Islamorada in the Florida Keys, is one of the four being given away gratis. World Travel Collection / Alamy
In This Story
Place

This 140-year-old beacon off the Florida Keys marks the wreck of a Navy ship that once roamed the Caribbean hunting pirates.
Destination Guide

When you live in a tower surrounded by ocean, crazy things can happen. You might ride out a hurricane with 200-mile-per-hour winds, rescue passengers from a sinking ship, be taken hostage by Confederate soldiers, be healed by a Seminole medicine man, maybe even go fishing with Herbert Hoover.

Such were the lives of lighthouse keepers in the Florida Keys, who manned their posts and kept countless ships from running aground from 1852 until the mid-1900s, when automation took their place.

If that sounds like a fun gig, then here’s some good news: The Sand Key lighthouse, six miles off the shore of Key West, is up for grabs in a public auction. The winner doesn’t actually get to use the light—its official job is now handled by a more modern light mounted on a nearby pole—but the new owner will acquire a wild tower of history.

Back in 1819, when Spain ceded Florida to the United States, American entrepreneurs saw dollar signs. They wasted no time capitalizing on the region’s biggest asset: water. The area south of the Keys had always been a busy shipping lane. And with its natural deepwater port, the town of Key West soon sprang to life, along with a few traditional brick lighthouses on the main navigation routes.

That was a start, but the 140 miles of outlying barrier reef between Biscayne Bay and Key West were still hard to navigate, and particularly treacherous, wrought with hidden, shallow-water shoals. It called for an innovative solution: reef lights.

Between 1852 and 1880, the U.S. government built six offshore reef lights. Also known as screw-pile lighthouses—because they stand on piles that are screwed into the sea bottom—these haunting towers look more like metal spiderwebs than buildings (a design that likely influenced a more famous tower across the Atlantic, built by an architect named A.G. Eiffel).

These outposts stand in just five feet of water, but they’re four to seven miles offshore, so the lives of their keepers came with distinct isolation. These lonely souls sometimes went weeks without human interaction. In some cases, the extreme solitude led to mental derangements. But on serene days, sharks swam by in crystal-clear waters, and nights were passed watching waves wash over the reef, illuminated by moonlight and burning whale oil.

The Keys reef lights comprise the largest collection of screw-pile lighthouses in the world. While traditional lighthouses of the time were masonry structures, the hurricane-prone Keys called for a more open design. Like a tepee without a cover, these lighthouses had iron skeletons that let the elements blow on through.

But while their construction was a marvel of their day, time moved on, and GPS navigation eventually rendered them obsolete. The last beacon was extinguished in 2015.

Today these offshore giants are still icons to boaters and divers, but to their owner—the U.S. government—they’re useless. In 2012, the Coast Guard deemed the rusting sentinels “to be in excess” of its needs, and began the lengthy process of liquidating these aging feats of engineering.

That year, the Coast Guard gave the first one away: Fowey Rocks lighthouse became part of Biscayne National Park. Sand Key lighthouse, near Key West, was next. But after the government failed to find a qualified nonprofit or government agency to take it over, it put Sand Key on the auction block in the spring of 2019.

It is a stunning structure. The black-and-white, 132-foot-tall cast-iron pyramid sits atop a beloved snorkeling site. It gets attention from pelicans, sea turtles, and the occasional brown-footed booby. Once the staircase is replaced, it will offer stunning sunrise and sunset views. If the keeper’s quarters are rebuilt, they would make a delightful apartment or museum.

But take note: The structure is being auctioned “as is.” Whoever assumes ownership will have to bear the cost of preserving it, with historical accuracy and within the rules of the national marine sanctuary in which it lies. While the bidding will probably reach only into the tens of thousands of dollars—it’s currently at $24,000—the restoration will be challenging and costly. Based on estimates from the ongoing Fowey Rocks preservation efforts, it might take upwards of $3 million—probably more.

The online auction for the Sand Key lighthouse started on March 29, 2019, at $15,000. The bidding is blind, and the process is open to anyone willing to put down a $5,000 guarantee that they can make good on their final offer. So far, there are five bidders.

“Bidder No. 4 has bid three times,” says Eric Martin. “I keep having to raise more money to stay in front of him.”

Martin, aka bidder No. 3, really loves lighthouses. It’s a passion that goes back to the 1970s, when he first climbed the Old Cape Henry lighthouse in Virginia Beach. Now when he and his wife, Susan, go on vacation, they go to lighthouses—400 so far, including 44 in Ireland alone. When Martin does volunteer work, it’s at a lighthouse. When he moved on after three decades as a loan officer, and his kids moved out, he put his history degree to work as a substitute teacher—a strategic move that gives him more time flexibility to do all things lighthouse, including serve as president of the Florida Keys Reef Lights Foundation.

Martin says he really wants to win the bid, but has a sinking feeling that something is awry. “These auctions normally run two months,” he says. “Sand Key has been on the block since March, and hasn’t seen a bid since July.” Martin wonders if the General Services Administration, which is conducting the auction, is stalling to get top dollar.

In the meantime, four other reef lights in the Keys—Carysfort Reef, Alligator Reef, Sombrero Key, and American Shoal—are up for grabs. If a suitable nonprofit can be found, the government will transfer ownership at no cost, as it did for Fowey Rocks. But there is a chance all four will go up for auction as well.

The feds tried to give Sand Key away in the same manner back in 2018. Martin’s nonprofit and several others applied at the time, but all were turned down. Once the government deemed that there were no qualified candidates, Sand Key became eligible for auction. Martin believes the same fate awaits the other four.

“I just want to get them saved, no matter what,” says Martin. “They’re going downhill fast. There’s hurricanes. If they’re not restored, the government will have to spend money to tear them down, because without maintenance, they will fall to the reef.” Indeed, in 2017 a hurricane ripped off the landing platform on American Shoal, opened the roof panels, and broke some windows.

Martin wouldn’t be opposed to seeing the restorations become a collaboration between groups. He says perhaps his organization could partner with the Friends of the Pool, which submitted a competing proposal for the Alligator Reef lighthouse.

That group is headed by a man named “Lighthouse Larry,” a local sculptor. Larry likes Alligator Reef so much that every year, he leads an eight-mile open-water swim out to the iron icon. He also makes small-scale statues of it and the other reef lights.

Alligator Reef is in the best shape of the bunch, though in Martin’s perfect world all five lighthouses will eventually be restored. His ambitions may be a little lofty, but expressed through his jolly smile and school-teacher glasses, it’s impossible not to root for his utopian vision.

Martin’s dream is to stabilize the structures, then make them into museums, with authentic guest rooms to rent. He also wants to see them relit, albeit with smaller beacons, since they’re no longer official navigation aids. In Martin’s world, volunteer keepers would move in, creating a full-circle restoration of history. But this time around, they would not be tasked with keeping the light; they’d be more like docents, who might aid an occasional boater in distress. Martin would also make sure that the lighthouses have nice mattresses and other modern comforts.

Back in 1926, Herbert Hoover harbored similar comfort concerns. When he learned that the Keys keepers had no radios, and would have to pay for such things themselves, Hoover—then the secretary of commerce—declared, “I don’t know of any other class of shut-ins who are more entitled to such aid. The government does not pay them any too well, and the instruments which they can hardly afford are in many cases their only means of keeping in touch with the world.”

It was mostly political grandstanding, since Hoover didn’t actually go so far as to get them radios. But in 1929, a generous (and anonymous) Key West woman did. Soon after, the lighthouse keepers wrote about the wonders of listening to Sunday sermons and choirs, boxing matches, and the results of presidential elections—including Hoover’s inauguration.

To Martin, these are more than just old stories. They’re the matrix of history. Seeing the Keys reef lights restored is infinitely personal.

“To me, it’s like having children,” he says. “People ask me which lighthouse I’d choose if I can only have one. That’s like saying what child do you want to keep. Carysfort has the only round keepers’ house. Sombrero is the tallest. Alligator survived the 1935 hurricane. American Shoal … .” He keeps going, for quite a while. Clearly his appreciation for every feature on each lighthouse runs deep.

A word to the wise, though: Sand Key is in the worst of shape of the five reef lights that are up for grabs. In fact, the word “lighthouse” itself is a bit of a misnomer at this point, since there is no actual house there. The keepers’ quarters burned up in 1989, when a restoration went awry. Also, some of the iron leg pieces are corroded and will need to be custom fabricated. The deck is failing, and the spiral staircase is missing along with the dock.

But taking Key West housing prices into account, and the prospect of living on top of the country’s only barrier reef, Sand Key might just be a pretty good deal.

It may still be safe to drink.
ruins

Invasive predators and other threats have pushed the Key Largo woodrat to the brink. A small but passionate group of scientists and volunteers is pushing back.
food

In the Florida Keys, the local catch is "renewable."
Video • Wonder From Home