The Most Adorable Way to Learn Anatomy Is With Knitted Organs - Atlas Obscura
Want to see fewer ads? Become a Member. 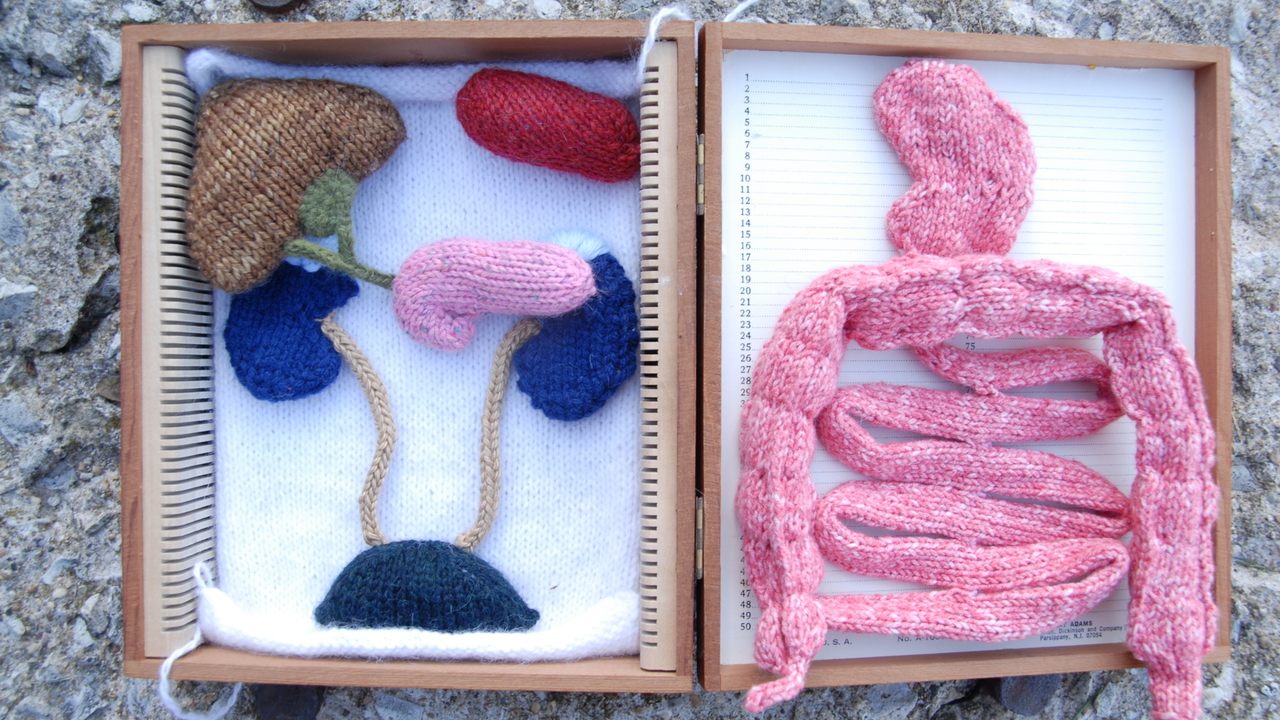 Lam's plush viscera include kidneys, the gallbladder, and intestines. All images courtesy of Daniel Lam
In This Story
Place

Daniel Lam was knitting his way through the whole tangled slew of abdominal viscera, and things were looking pretty good. He’d found the perfect yarn for the intestines—a marbled pink hue—and was closing in on the right proxy for a gallstone. It needed to be small and round. (A lima bean, to its credit, was small enough to shimmy between the stitches, but the shape was all wrong.) That’s when Lam hit the “rock bottom of nerdy knitting,” he wrote on his blog, Masculiknity. “AKA using a mardi gras bead inside a yarn gallbladder to simulate cholelithiasis.”

For centuries, doctors have consulted anatomical models to understand how branching nerves, layered tendons, and nestled organs all collaborate to keep us alive. The 18th century birthed legions of wax models, with skin vaguely shellacked and utterly poreless. Sculptors sometimes engineered a game of Operation in reverse, tucking removable organs into a flayed-open abdominal cavity. A 19th-century surgeon crafted dissectable papier-mâché specimens from cork, paper, clay, and other ingredients.

With yarn and needles, Lam, a fourth-year medical student at the University of Chicago’s Pritzker School of Medicine, takes an approach that is decidedly less macabre and way more cuddly. “I made the liver [into] a little plump pillow,” he says.

Lam’s been a knitter since childhood, but only moved beyond the usual suspects of scarves, hats, and socks during his second year of med school, when he was assisting with the anatomy class that’s the foundation of the introductory curriculum.

It started with an eyeball, suspended in a shoebox so that students could survey the muscles that control movement. Lam based the shape off a pattern for a spherical Christmas ornament, but other crafters have compiled patterns for crocheted, felted, and knitted brains, lungs, spines, even chromosomes. Lam then tackled the brachial plexus—the ropey nerve bundle running from the spine and neck into the arms—and the whole lot of abdominal organs. Next up is the vascular system, with its elaborate ecosystem of arteries, veins, and capillaries.

Since they serve as teaching tools, Lam’s plush viscera don’t throw anatomical fact to the wind. He strives to get the scale right—he lost a day or so of work when he’d bungled the size of the pancreas. For ease of identification, Lam sometimes takes liberties with the organs’ colors. (A healthy kidney is pink, not bright blue.)

Aesthetics aren’t Lam’s primary concern for the models. “I’d prefer it to be accurate than look good,” he says. “But it does look kind of good.”

The Ceramics Artists Experimenting at a Shuttered Montana Brick Factory

At the Archie Bray Foundation, wildlife and an isolated locale inspire creativity in clay.
knittinganatomymedicinevisual

In 19th-century Philadelphia, an anatomist dissected and mounted a human nervous system. Now researchers are trying to figure out whose remains are stretched out in a glass case.
soviet architecture

The treatments are no longer mandatory, but they're still available.
factories

What It's Like to Work in a Synthetic Cadaver Factory

An artist is making massive monuments to medical illustration.
Video • Object of Intrigue