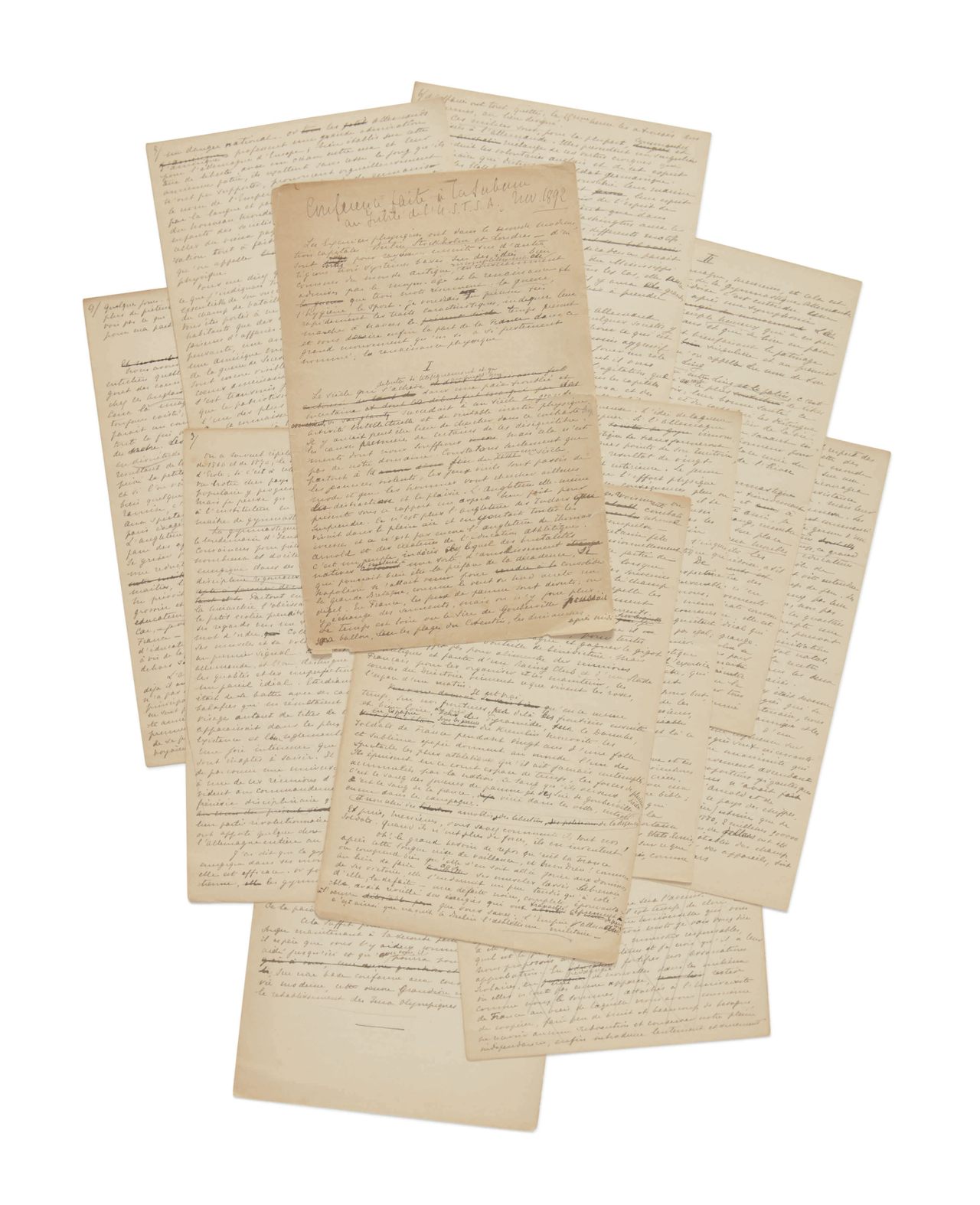 The 14-page manifesto went missing for 50 years in the middle of the 20th century, before being found in a Swiss bank vault. Courtesy Sotheby's

When Pierre de Coubertin stepped up to deliver his keynote address at the 1892 meeting of the Union of French Athletic Sports Societies in Paris, he likely had no idea how popular, contentious, and lucrative his idea would become. He was about to propose the return of the Olympic Games, after a 1,500-year hiatus.

Last month, de Coubertin’s speech outlining the competition was sold at a Sotheby’s auction, to an anonymous buyer, for $8.8 million, making the document the most valuable piece of sports memorabilia in the world. The manifesto bests the previous record holder, a Babe Ruth Yankees jersey, by over $3 million.

De Coubertin’s 14-page speech preceded the first modern Olympics by four years, but it encoded the DNA of the Games. “For all the vast changes that have accrued to the Games since their first celebration in 1896,” writes John MacAloon, an Olympics historian at the University of Chicago, “they still bear indelibly—from their flag to their official ideology—the stamp of Pierre de Coubertin.”

Born a baron in Paris, Pierre de Coubertin grew up wealthy. When he was seven years old, Prussian soldiers packed de Coubertin’s croquet box with explosives and destroyed a bridge linking Paris to Le Havre, according to the International Olympic Committee.

De Coubertin grew up to be a fierce patriot who sought to reform the French education system by introducing sports into the curriculum. He “was a product of his time,” says Randy Roberts, a sports historian at Purdue University. “The worst thing for him was the humiliation of the Franco-Prussian War. He felt sports were a way to revive French masculinity.”

When he was 31, he found himself—through a combination of good luck and diplomatic finesse—at the helm of the French athletics sports union, where he outlined his grand plan. The meandering speech he gave stresses the importance of exercise around the world, offering particular praise to the British education system, in which de Coubertin was educated, for prioritizing physical education. The address culminates in his vision for the “grandiose and beneficent” work of reviving the ancient competition, which had last been waged in the year 393.

“[The event in] 1896 was an ad hoc type of thing, an old boy’s club,” Roberts says. “But then it started to attach itself to the World’s Fairs, because nobody was going to see the Olympics.”

After the war, however, things began to look up. The event was held with increasing success through the 1920s, and its viewership skyrocketed for the 1936 Olympics in Berlin, when it was first televised. When De Coubertin, the event’s chief advocate and imperator, died a year later, his heart was entombed in a monument on the site of ancient Olympia, Greece.

In its 123-year history, the Olympics have seen their fair share of crises, scandals, acts of activism and goodwill, and more. They are a quadrennial exercise in culture and politics, told through the gossamer guise of athletics and competition. Though very different today than they were in 1896, perhaps it’s just as well that they keep reminding us who we are, and how we’ve changed.

“When de Coubertin started, he didn’t have any of this idea of the flag salute, playing national anthems,” Roberts says. “He wanted to move away from these strident nationalisms. And now that sort of nationalism has sort of taken over.”

At the end of his career, the Bambino wanted the Bronx and got a different borough instead.
sports

The Presbyterian Roots of Ice Hockey in North Korea

The secret of the slide, from ancient Germanic tribes to tony Alpine resorts.
games

For every talent, there must be a champ. Are you ready for Pêl-Law, lion dancing, or marbles?
Video