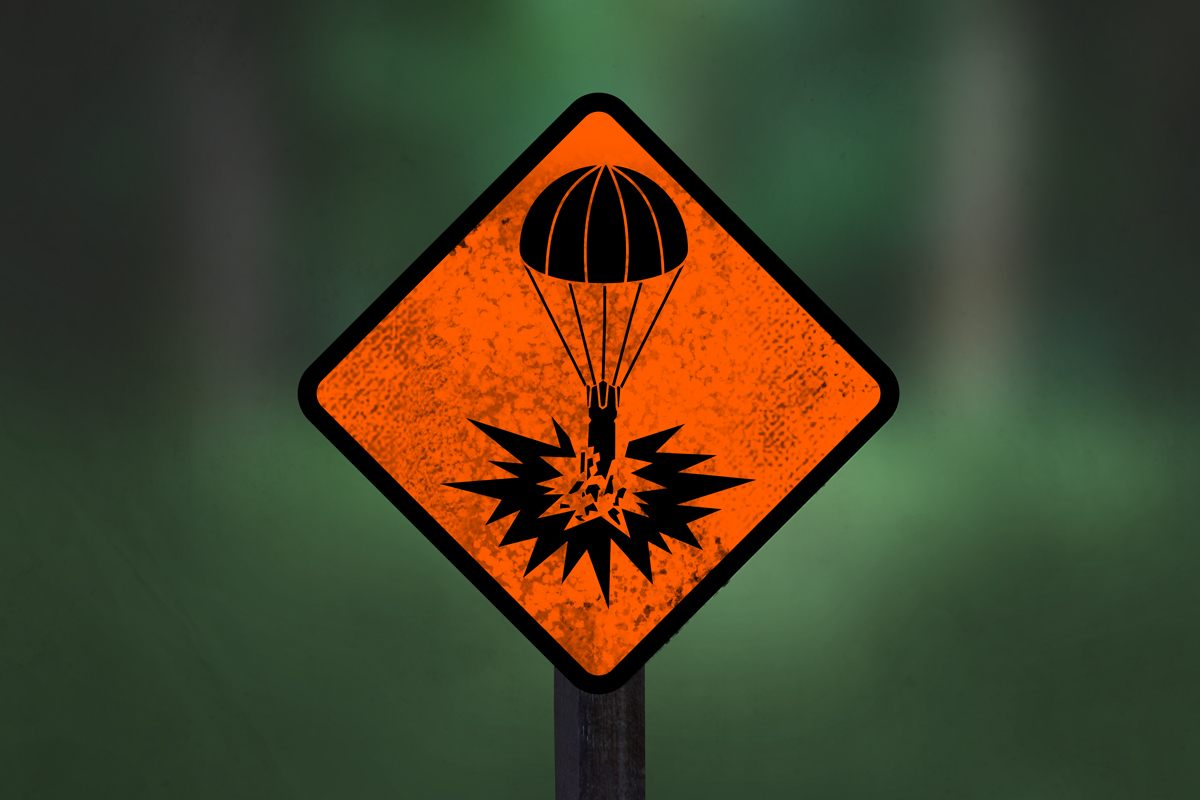 A sign marks the plane crash that caused two nuclear bombs to fall in North Carolina.

In April 2018, Atlas Obscura told the stories of five nuclear accidents that burst into public view. Check out the other articles in the series: The “demon core” that killed two scientists, missing nuclear warheads, what happens when a missile falls back into its silo, and the underground test that didn’t stay that way.

In 1961, as John F. Kennedy was inaugurated, Cold War tensions were running high, and the military had planes armed with nuclear weapons in the air constantly. These planes were supposed to be ready to respond to a nuclear attack at any moment. If the planes were already in the air, the thinking went, they would survive a nuclear bomb hitting the United States.

But one of the closest calls came when an America B-52 bomber dropped two nuclear bombs on North Carolina.

In January, a jet carrying two 12-foot-long Mark 39 hydrogen bombs met up with a refueling plane, whose pilot noticed a problem. Fuel was leaking from the plane’s right wing. The wing was failing and the plane needed to make an emergency landing, soon. But before it could, its wing broke off, followed by part of the tail. The plane crash-landed, killing three of its crew. (Five other men made it safely out.)

In the plane’s flailing descent, the bomb bays opened, and the two bombs it was carrying fell to the ground.

As it fell, one bomb deployed its parachute: a bad sign, as it meant the bomb was acting as if it had been deployed deliberately. It started flying through the seven-step sequence that would end in detonation. The last step involved a simple safety switch. When a military crew found the bomb, it was nose-down in the dirt, with its parachute caught in the tree, still whole. As the Orange County Register writes, that last switch was still turned to SAFE.

The second bomb had disappeared into a tobacco field. Only “a small dent in the earth,” the Register reports, revealed its location.

It took a week for a crew to dig out the bomb; soon they had to start pumping water out of the site. Though the bomb had not exploded, it had broken up on impact, and the clean-up crew had to search the muddy ground for its parts. When they found that key switch, it had been turned to ARM. To this day, it’s unclear why the bomb did not go off.

The crew didn’t find every part of the bomb, though. The secondary core, made of uranium, never turned up. Today, the site where the bomb fell is safe enough to farm—but the military has made sure, using an easement, that no one will dig or erect a building on that site.

The Puzzles and Pitfalls of Reconstructing Paraceratherium, the Largest Ever Land Mammal

Join us for a daily celebration of the world’s most wondrous, unexpected, even strange places.
cars

The Brief Life and Tragic End of a Ferrari Supercar

This Plane Crash Is Both Spectacular and, Thankfully, Injury-Free

The 1957 Rikers Island Plane Crash That Made Inmates Heroes

It was a frightening time for air travel.
Want to see fewer ads? Become a Member.
From Around the Web
THE GASTRO OBSCURA BOOK
Taste the World!
An eye-opening journey through the history, culture, and places of the culinary world. Order Now