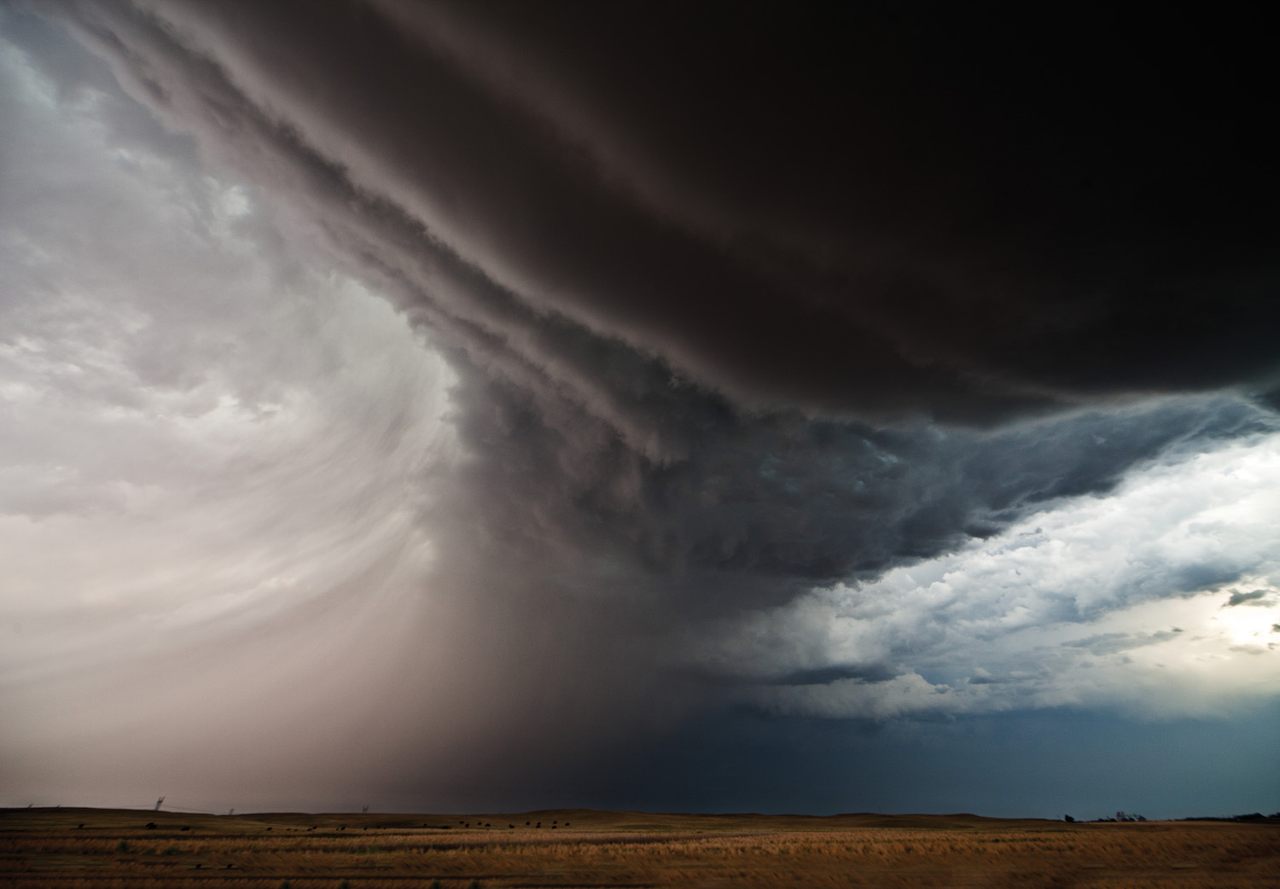 It was just three days. Just three days between when photographer Camille Seaman first saw storm chasing on television and when she was hunting down a supercell herself. Even ten years later, the experience is still vivid in her mind: “It really was like watching a galaxy being born from a nebula.”

In total, Seaman spent seven years searching for gathering clouds in some of America’s stormiest states: Nebraska, South Dakota, Kansas. Her photographs, now brought together in the new book The Big Cloud, are an spectacular document of nature’s power. They show clouds thick and ominous, or funnel-shaped, hovering over a rural landscape or spiked with lightning. For all the drama she captured, she reveals that storm chasing involves a lot of data—and a lot of patience.

“There’s a lot of really boring parts, where you’re sitting in a car for many hours and stopping in gas stations for bathroom breaks and bad food,” she says. A day would typically begin with a meteorological briefing. After analyzing everything from dew point to wind direction, Seaman and her crew would try to pinpoint the location of a potential supercell.

Storm chasers have their own vocabularies for meteorological formations. A supercell can be called a “mother ship,” for its otherworldly, spaceship-like appearance. They’re actually rotating thunderstorms that can generate hail, high winds, lightning, rain, and, occasionally, tornadoes, and they’re often topped by a dense cloud formation known as an “anvil.” That’s something most people don’t want to stand beneath.

After the briefing is over, the team hits the road. Once they’re in what Seaman calls “chase mode,” there are “no bathroom breaks, there is no stopping for food, no nothing.” At that point, “as things start to actually set up in the storm, our whole objective is to stay with that storm in the right position, which is usually—not always, but usually—the southwest corner of the storm, and follow it safely, so that we can photograph it and see if it produces a tornado.” The goal is to observe and photograph without being in danger. “The worst thing for storm chasers to end up being storm chased.”

Seaman is aware of how storm chasers are perceived. “Quite often our vehicles are noticeable, because we have special antennas on the car, and we just all pile out of the car in the middle of nowhere,” she says. “We do often drive through areas that have been totally devastated, sometimes days before, sometimes years before, by tornadoes. And you can still see signs of that devastation. So we—at least I can speak for my particular group—are very compassionate and empathetic. Because we understand that these are people’s lives, and their homes, and how it is one of the most frightening things to be in a motel and hear that siren go off, the tornado warning.”

It’s a situation that Seaman has been in herself. “I’ve had at least three warnings go off at night, and [during] one of them, I said to my meteorologist, ‘What exactly should we do because we’re in a motel that doesn’t have a basement?’” she recalls. His advice was to grab the mattress, jump in the bath tub, and pull the mattress over you.

In 2014, Seaman stopped chasing storms. An experience a year earlier in El Reno, Oklahoma, was the beginning of the end. “Everything about that storm—for the first time ever, my whole body was like ‘This isn’t good.’” The El Reno tornado turned out to have been the largest ever recorded: 2.6 miles wide, with winds of nearly 300 miles per hour. It also caused 19 fatalities, including three storm chasers, friends of Seaman’s.

Climate change models suggest that America will experience severe storms more frequently, which means more potential fatalities. Storm chasers, Seaman says, have been critical in helping develop early warning protocols. “I know for a fact—for a fact—that if not for these storm chasers, people would not have the advanced warning that they do,” she says. “We obligate ourselves to say that if we see something that touched the ground, and we know its GPS coordinates, we call in to the local weather station, we call it into the police.”

Seaman still feels the awe of those days of boredom punctuated with risk and reward. No two storms were alike, she says. Each had its own light and color and smell. “It sounds like something out of Greek mythology, but it really was like watching the gods play.”

Atlas Obscura has a selection of images from The Big Cloud.

An Algorithmic Investigation of the Highfalutin 'Poet Voice'

New research suggests that the affected reading style consists of a particular set of attributes.
stormsweathervisualphotographynature

A satellite captures the stunning effects of heavy rain and high winds on a landscape that—coincidentally—is used to calibrate satellites.
photography

In both cases, "You’re trying to find the best spot to shoot a moment in time that no one is ever going to see again.”
nature