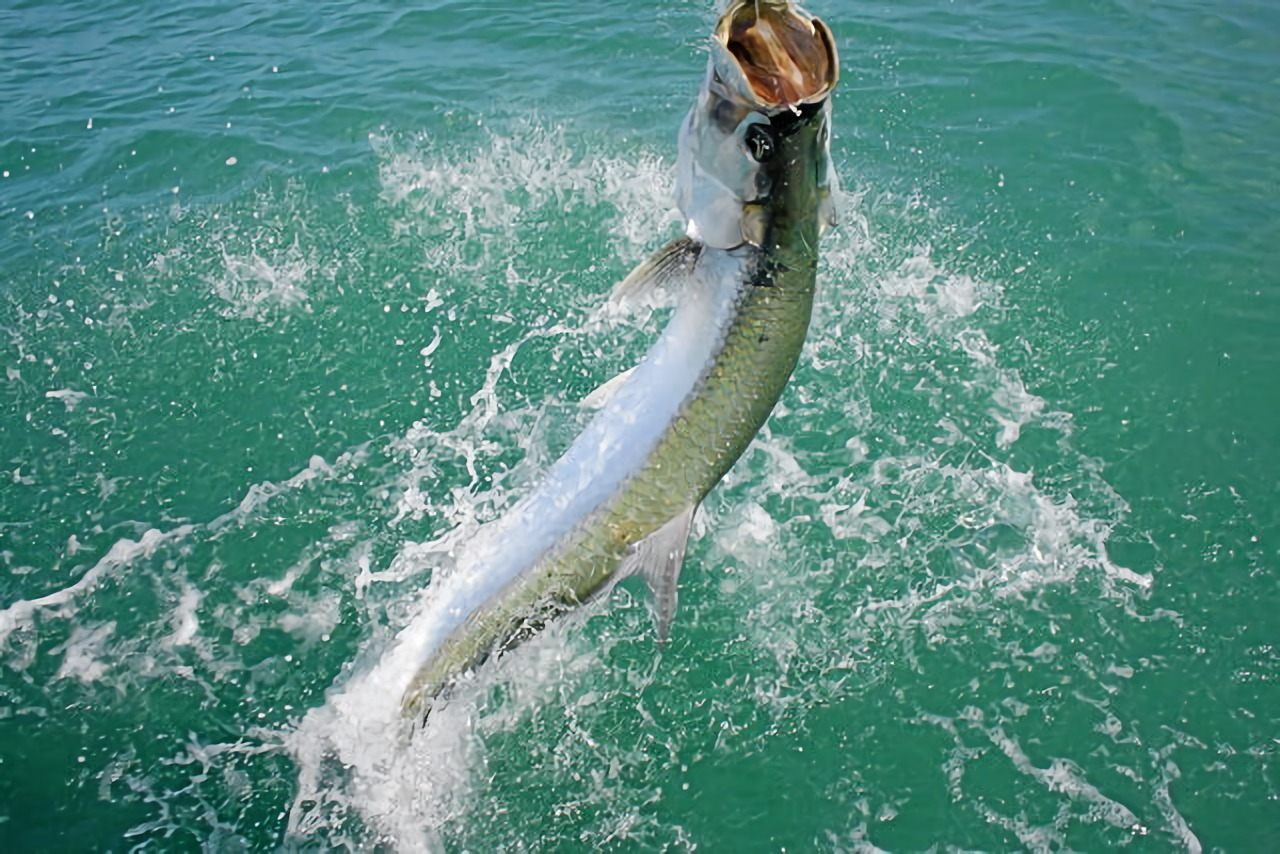 Tarpon can weigh 250 pounds and leap 10 feet in the air while trying to throw off the hook. Courtesy Cindy Brown
In This Story
Destination Guide

Cindy Brown remembers her first battle with the Silver King. “It dragged us all over Pine Island Sound for 45 minutes to an hour, and I was just hanging on the rod for dear life,” she recalls. Brown lives in Florida, close to the state’s southwest coast, a hotspot for tarpon fishing. The powerful game fish, nicknamed the “silver king” for its dazzling appearance, grows up to eight feet long and can leap 10 feet out of the water. Weighing up to 250 pounds, tarpon can wear out even the strongest anglers. Brown says that, when she finally got her first silver king to the side of the boat, she was exhausted and exhilarated. She’s been hooked on tarpon ever since.

Brown, who now competes in an annual tarpon tournament in Fort Myers, isn’t the only person under the silver king’s spell. While the tarpon’s range stretches from the West African coast to Brazil and as far north as the Carolinas, southwestern Florida is widely considered the epicenter of tarpon fishing. The silver king has brought visitors to this corner of the state for nearly 200 years; some historians believe it even played a role in making Florida a tourism hub. The fish caught in these waters is not eaten—it’s bony and unpalatable to Americans, though tarpon is consumed in Mexico and some South American and African countries. In Florida, anglers with enough strength, endurance, and luck to muscle a tarpon to the side of their boat take a quick photo and then, by law, must release the animal. For Florida’s tarpon enthusiasts, it’s all about the thrill.

“When the sun hits them, or when they are jumping and you see that light bouncing off them, they are just so beautiful,” Brown says. “It’s an incredible sight.”

In 2012, shortly after Brown caught her first tarpon, her husband signed up for a tarpon tournament in Fort Myers with a group of male friends. Brown also wanted to compete, so she put together an all-female team and hired experienced local fishing guide Jimmy Burnsed. The team, which includes members from as far away as California, has competed nearly every year since, braving bruises and busted gear that the massive, feisty tarpon is famous for causing.

“It’s a test of wills,” says Brown, who wears a thick leather sportfishing “fighting belt” to avoid injury. “And it’s a dance of knowing when to reel and when not to reel.” Standard tarpon technique is to ease up on your line when your catch jumps—it’s known as “bowing to the king.” Once the fish is back in the water, the angler brings the rod’s tip high and tightens the line again. Eventually, when the fish is brought to the side of the boat, the anglers snap a photo, measure its length and calculate its weight, and then let it go.

Tarpon were not always a catch-and-release quarry on the Florida coast—that’s a fairly recent change. But the fighting fish has been a draw to this part of the state since shortly after the Civil War, when “well-heeled outdoorsmen …. traveled from the North, Midwest, and even from across the Atlantic to court the silver king,” according to a 2012 paper in The Journal of the Gilded Age and Progressive Era. In an interview, the paper’s author and Coastal Carolina University historian Kevin Kokomoor says that tarpon fishing’s obscure history “really drove the development of the region.” Hotels, lodges, and gear shops sprang up, catering to tarpon anglers, while rail and steamboat companies opened new lines, bringing more silver king seekers and fueling even more development. Anglers spent days and sometimes weeks on the water, then fought the fish for hours to land it. Kokomoor likens the popularity of tarpon fishing in the early 20th century to national sports such as baseball and football.

After a lull during the Great Depression and World War II, tarpon fishing bounced back in the mid-20th century: It was good business that helped extend the tourist season well into summer, says Shandra Rummel, who runs a women-only tarpon tournament in Islamorada in the Florida Keys. Beginning in the 1950s, more towns and local businesses organized tournaments, sometimes with lucrative prizes. In the early 1980s, Boca Grande, the self-styled tarpon capital of the world, launched an invitational tournament with a first prize of $100,000. As anglers from around the world came to compete, television crews followed them on boats, broadcasting their triumphs and defeats. The angler with the heaviest catch won, but weighing the fish required taking it to shore and killing it. By the end of the 20th century, attitudes shifted, and catch-and-release, now the law, was adopted.

The sport’s gender balance has changed as well. In its early days, the anglers were almost exclusively men: Tarpon-fishing, requiring long hours on the open water and grappling with a huge fish that could leave you bruised and beaten, wasn’t considered particularly ladylike by the cultural norms of the 19th century. (There were rare exceptions: Sometime around 1890, a local photographer captured the image of a confident-looking woman, visiting from Scotland, posing with her catch of two enormous tarpon.)

Women have become much more of a presence in the sport in recent decades, and are often more technically proficient than male anglers with the same amount of experience. Women, says veteran tarpon guide Burnsed, “do really well because they listen well and they learn the techniques much faster than men.”

One of those techniques, fly-fishing, skips the typical live bait, such as crab or mullet, in favor of an artificial lure—anything from a clump of feathers to a bundle of hair—that resembles tarpon prey. In the Florida Keys, for example, tarpon feed on the palolo worm, which hatches en masse from coral rock along the Atlantic side of the island chain. The event, occurring in early summer each year, lures large numbers of tarpon, and anglers, to the area.

“These big monsters come to work the hatch here,” says Rummel, who prefers fly-fishing and takes pride in making her own flies. “It’s like a painter spending so much time on a painting to make it perfect. It’s the cumulative enjoyment of figuring out how to do it right [and then knowing] I tricked this beast into eating my dog’s hair!” Fly-fishing also uses lighter gear that breaks more easily, adding another challenge and, for enthusiasts, an even bigger thrill.

For tarpon anglers, the mere sight of the shiny fish swerving next to their boat in the shallows, or leaping high out of deep water, brings a wave of joy, and anticipation. It’s an irresistible lure that brings an international audience to a stretch of Florida coast each year, sustaining a small economy built around the silver king. “It never gets old,” Brown says. “I hope to catch a tarpon every season and I will do so as long as I am physically able.”

Provence's négo chin boats have made a comeback thanks almost entirely to one man in love with his local waterway.
salt

Sydney's technological solution for drought is having unexpected effects on marine life.
oceans

Scientists are trying to keep one of the world’s last great wildernesses intact.
sailors

In Cancale, the seasonal absence of men meant women ran the show.
List

The Best of Weird Florida

America's strange has sunk to the bottom and settled in these Floridian places.
Video