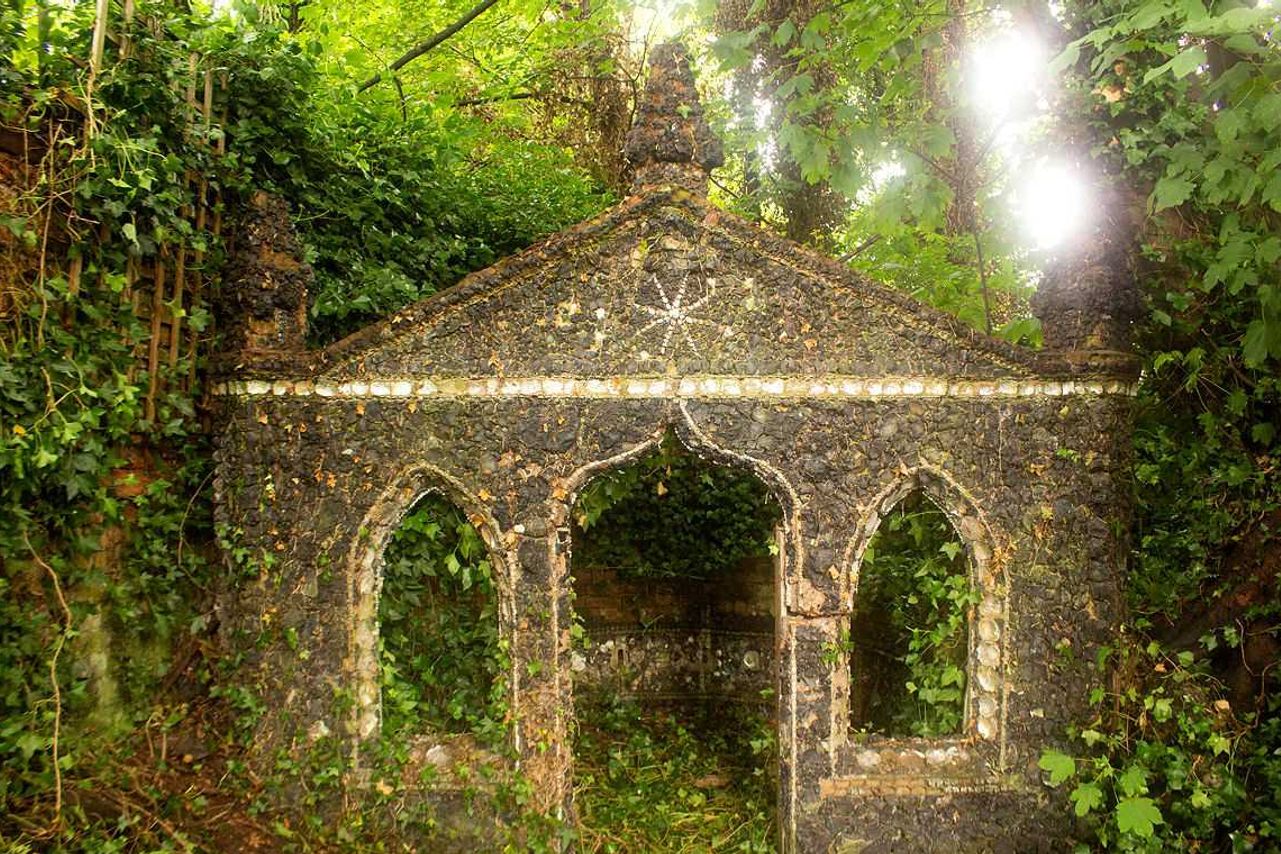 Like something out of a storybook, maybe? At least until you look a little closer. Copyright Daniel Sturley
In This Story
Destination Guide

As one typically does before moving out, Jonathan Bostock was cleaning up and beautifying his property in Birmingham, England, for its new owners, clearing away the mess that can gather over the decades when one calls a place home. Then, in his overgrown garden, he found a bunch of centuries-old animal teeth.

The teeth weren’t loose and scattered, but rather built into an old, hidden “folly,” or “grotto,” as some prefer. (It’s hard to decide whether loose or architectural teeth are more disquieting.) Follies are purely decorative outdoor structures that were popular in England in the 18th and 19th centuries, and Bostock’s is quite the decoration indeed: So far, the identified components of the unusual stone facade include oyster shells, scallops, bones probably from sheep and cows, and those animals’ teeth. It may sound a bit grisly, but at a glance the structure is charmingly ornate, even enchanting, like something plucked from a storybook.

Though Bostock always knew that there was some kind of building in his garden, he says its historical and aesthetic value were sufficiently hidden from view before July 2021, when he cleared the brush. Prior to then, he says, “I really hadn’t given it much thought”—it was just “hidden away” beneath “quite a lot of ivy” and trees.

Once he got a proper look at the folly, Bostock says, he “didn’t have a clue what it was. I could see it was historic in terms of how it was built,” but the teeth and bones seemed inexplicable. So he took some photos and turned to Twitter for some pointers, and “interest hit the roof,” he says. Soon, local historians descended on the half-acre-plus property, in addition to the country’s National Trust for heritage conservation.

Research is ongoing to determine the folly’s precise date, purpose, and original owners. For now, we know that it was meant to beautify the space and provide a spot for some form of recreation and relaxation. “Most people would not realize the decoration was bone, it is so detailed and you tend to notice the pattern, not the material it is comprised of,” writes National Trust garden consultant Pam Smith, in an email. “It is such a beautiful structure that it doesn’t feel sinister. What I wonder about is all the conversations that have occurred in the grotto over the years.” Smith adds that teeth and bone were commonly used as decorations in the Georgian period, since they were “readily available” and provided “a white, uniform decorative material.” With all these bones lying around, she writes, “we’re a quirky lot in our garden strange history … we have many a strange story to share.”

All these years later, as it changes hands yet again, perhaps the folly-or-grott0 can still invite relaxation and conversation, while taking on a new role: as a time machine to the English Midlands’ pastoral past—one that apparently hides in plain sight.

Lactose intolerance was no match for a prehistoric desire for dairy.
architecture

The Red Lion is considered to be the oldest Elizabethan playhouse—and it may have recently seen the light of day.
caves

Rugged mountains and peaceful streams were hidden under layers of brown paint.
Video • Object of Intrigue

1:26
Want to see fewer ads? Become a Member.
From Around the Web
Atlas Obscura Trips
Southern England: Lore of Dartmoor
View This Trip
Thanks for sharing!