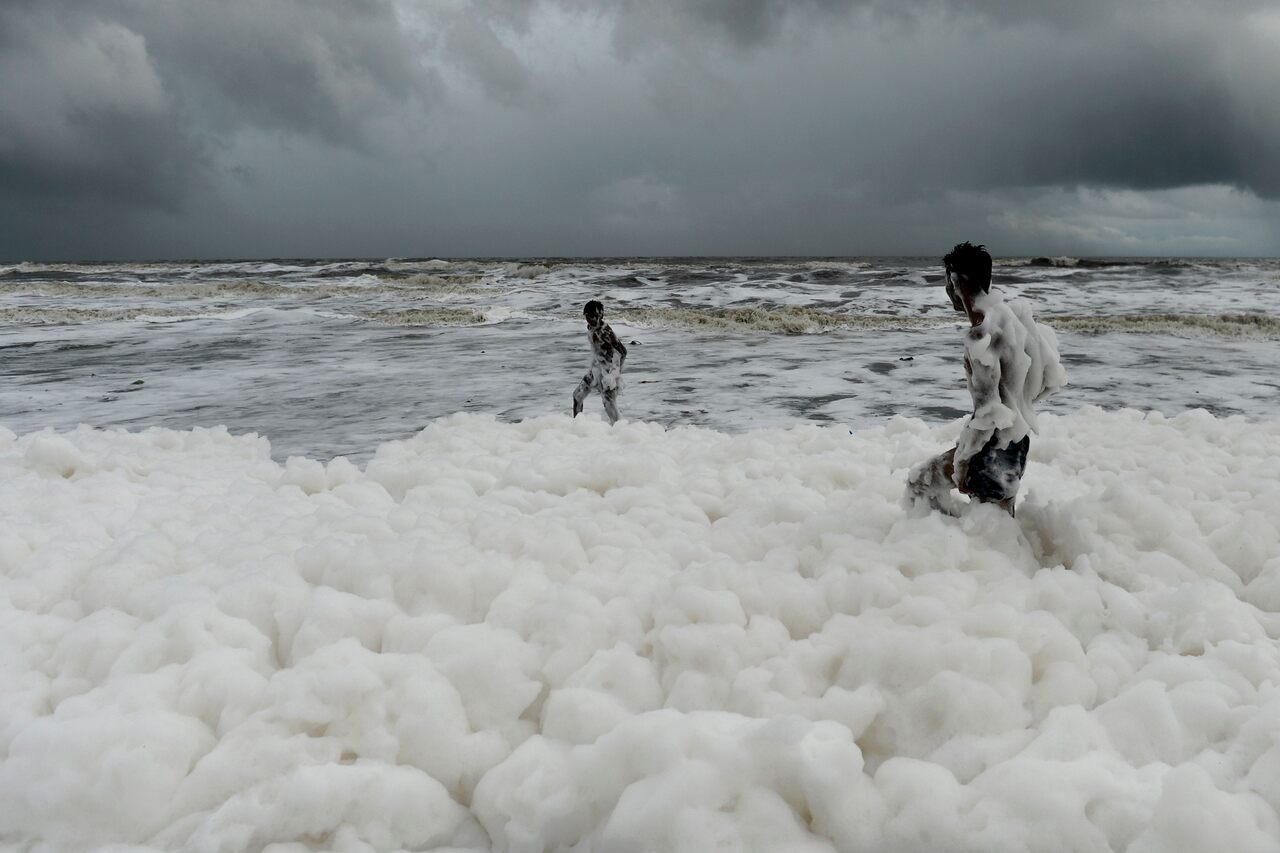 Given that it can contain toxic algae and sewage, the foam is no place for fun. ARUN SANKAR/AFP via Getty
In This Story
Destination Guide

Stand on a beach and watch the waves roll in, and you’ll notice a front of white, frothy water. After a wave breaks and barrels to land, it hits the swash zone. Before the turbulent water recedes, becoming what’s known as backwash, it looks a little bubbly. Water comes in, it goes out, it comes back in again—it’s cyclical and generally harmless. But once in a while, beaches are inundated with stubborn, turbid foam that sloshes ashore and stays there.

Over the past few days, Marina Beach, which sits on the Bay of Bengal in Chennai, India, has been swallowed by pillowy clouds of foam. It looks white and airy, like fake snow, dollops of whipped cream, or a bubble bath gone awry. Visitors to the urban beach have snapped photos of revelers wading up to their knees in it, smearing it on their shirts, and flinging it into the air.

Some amount of sea foam is common, because ocean water—even if it appears to be crystal-clear—is full of little bits of synthetic and organic debris. The surface might be speckled with a dash of dead algae or microscopic skeletons, or a sprinkling of dissolved fats, salts, or proteins. Swirl a bit of water vigorously, as wind and waves do, the National Oceanic and Atmospheric Administration explains, and bubbles will form on the surface.

But there’s a big difference between a smattering of bubbles and a frenzy of foam that makes the beach vanish. According to researchers from the Vienna Institute of Technology, who surveyed past sea foam research for a 2011 literature review in Water Research, most of it results from natural phenomena, such as phytoplankton blooms, or decaying seaweed or terrestrial plants. But human influence amplifies those factors.

“Humans, when they dump nutrients into the water, can make that much worse,” says Matthew Reidenbach, an environmental scientist at the University of Virginia whose research includes chemical dispersion in coastal oceans, and who has studied the ecology of New Delhi’s Yamuna River. Foam can also be especially meddlesome at certain times of year, corresponding to moments in the life cycle of phytoplankton. (When plankton die and decompose after a big bloom, that’s great fodder for foam.) In the case of Chennai, Reidenbach suspects the foam is fueled by a combination of algal blooms—which gather strength from sewage and nutrient-dense runoff—and detergent or other chemicals in the water. According to the AFP, the Tamil Nadu Pollution Control Board will analyze samples of foam.

Sewage runoff is a big problem in cities where the population had grown faster than the infrastructure, like Chennai. Pravakar Mishra, a scientist at the National Centre for Coastal Research in Chennai, told the AFP that only 40 percent of wastewater in Chennai, a city with an estimated population of 10 to 11 million, is sufficiently treated. “The rest flows into the sea and this is what happens,” he said. The surest way to prevent foam is to limit the sewage, detergents, and other anthropogenic runoff entering the water in the first place, Reidenbach says.

Once foam has come ashore, it’s smart to keep your distance. “Like a balloon, when the bubbles pop, they release gas,” Reidenbach says. “Mostly it’s just air, but if the bubbles are combined with nasty chemicals, it creates an aerosol that gets into the air.” Industrial runoff and toxic algae can cause problems ranging from skin irritation to respiratory trouble.

Theoretically, it might be possible to limit the foam by tweaking the pH of the water: Basic water is more prone to foaming than acidic water. But that’s not feasible on a big scale. “It could work for hot tubs,” Reidenbach says, “but not oceans.” In the absence of a chemical solution, sea foam eventually deflates. Wait long enough and the foam will bake in the sun, the bubbles will pop, and the sand will return to view. In the meantime, don’t frolic in the froth.

We're All Citizens of the Garbage Patch State

An Italian artist has created an imaginary homeland for all of our plastic waste.
rivers

A recent spike in seahorse sightings is more evidence of a river revival.
Video

Norfolk's ghost ponds project wants to help biodiversity, one small wetland at a time.
Read more
Thanks for sharing!